“Wilt Chamberlain making a shot” by Kip-koech is marked with CC BY 2.0. To view the terms, visit https://creativecommons.org/licenses/by/2.0/?ref=openverse

Are you trying to find a Wilt Chamberlain Signed Basketball? Well, you’ve come to the right place.

Just take a moment to reminisce about how this star rose to greatness by reading about his legacy.

Although many legends have risen from players in the NBA, very few have reached the status of Wilt Chamberlain.

At 7’1”, Wilt Chamberlain, sometimes known as “Wilt the Stilt” (a name he hated) was larger than life, and so was his incredible ability to play the game.

Wilt’s incredible career began in high school. He attended Overbrook High School, where he was a member of their basketball team for three years.

During that time he scored 2,252 points, 90 of them in a single game. This incredibly high score was not even a one off, he also scored points in the 60s and 70s in other games.

He lead the team to championships in two of those years. It was also during these years that he began to acquire many of his nicknames.

Besides Wilt the Stilt, he was also sometimes called simply The Stilt, Dippy, or The Big Dipper.

While he didn’t mind Dippy or The Big Dipper due to being so tall he had to dip in order to get through a doorway, he disliked any references to his height in nicknames.

His friends gave him the nickname of the Big Dipper, and he liked it so much he would later name his home “Ursa Major” after the constellation he himself was nicknamed for.

His performance was so great, over 100 colleges invited him to attend, and dozens of them offered all sorts of incentives to get him to pick their university.

He chose to attend University of Kansas, where his fame continued to grow.

NCAA rules prevented him from playing on the varsity team as a freshman, but in a game played freshman against varsity, his team won decisively at 87-69. Wilt himself scored 40-42 of those points.

When he was at last allowed to join the varsity team, his performance was as dazzling as you can expect.

His incredible performances lead to the University of Kansas playing against North Carolina for the 1957 NCAA title.

Although they did lose that game by one point, Wilt was named the most Outstanding Player in the tournament.

Wilt continued to be a sensation in his time at college. He was selected to all-conference and All-America teams.

He continued to play well for University of Kansas, but decided to forgo his final season at university and instead turn pro instead.

In a story he sold to Look magazine for $10,000 he cited unfair tactics used against him during play—mainly freezing the ball and game stalling tactics, as well as needing money for the reasons he chose to quit college basketball.

Unfortunately, his choice meant he would be on the sidelines for a year. The NBA had a rule that forbid college players from playing in the NBA until after their class graduated.

Wilt decided to play for the Globetrotters instead. He made 50K during that year—about 41k more than what an NBA player made during a season.

After this, Wilt came to the NBA in an unusual manner. In 1955, the NBA made a new rule that allowed teams to draft local picks called a “territorial draft rule” in exchange for giving up their first pick.

The Philadelphia Warriors did this for Wilt Chamberlain, reasoning that he had gotten his start at a local high school, and so really he belonged to them.

Since there was no NBA team in Kansas to disagree with him, the NBA allowed it. To this day, it is the only time a team has used the territorial draft rule in quite this way.

By this time his fame had greatly grown, and everyone was excited to see what Wilt Chamberlain could really do when he was playing against the best of the best.

His rookie year was a sight to behold.

He racked up an average of 37.6 points and 27.0 rebounds, and in his very first game he did better than this at 43 points and 28 rebounds. 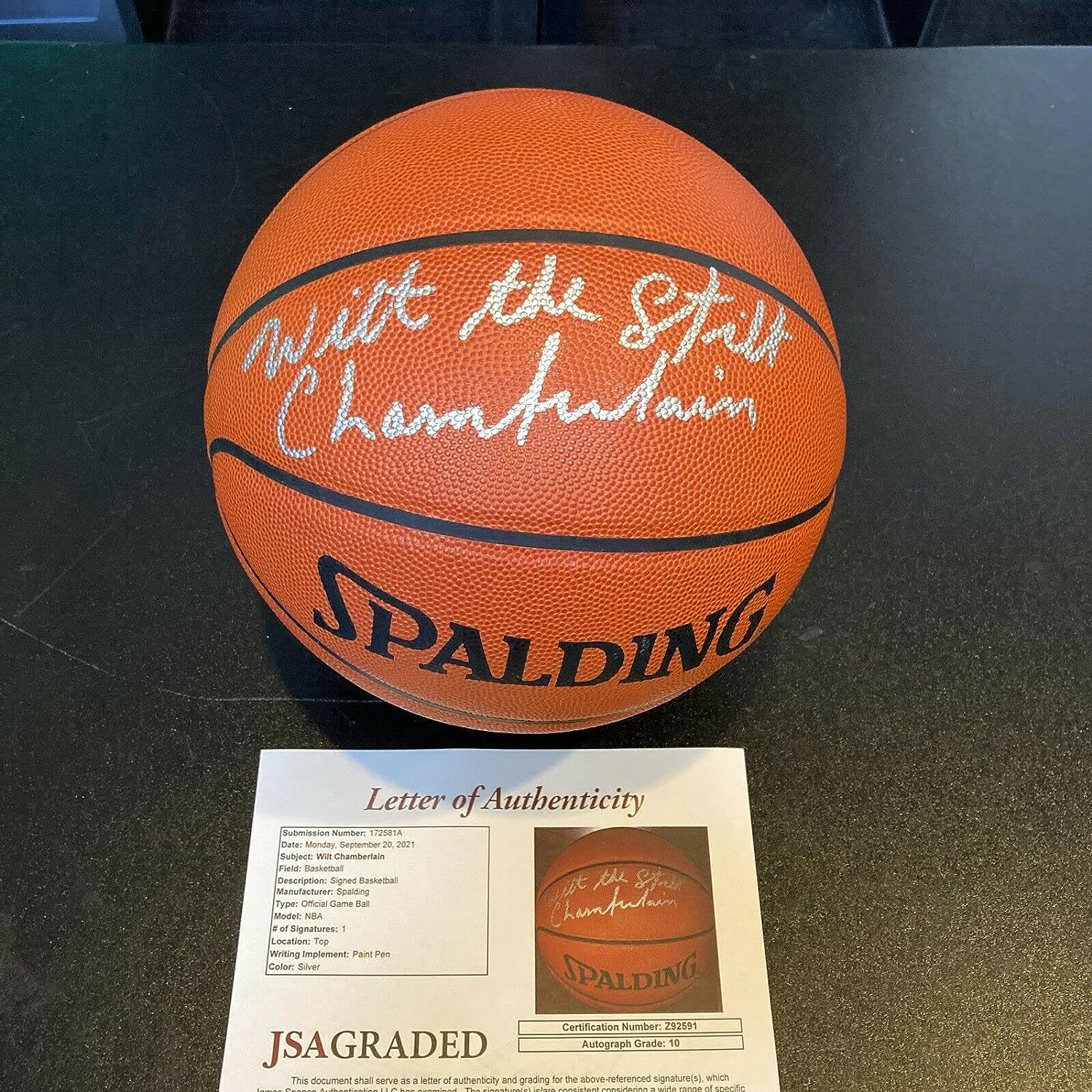 He was also selected to the All-NBA First Team, all in one year. Only one other player in the history of the NBA has managed to rack up as many awards in one year, Wes Unseld in 1968.

Before gaining Wilt Chamberlain, the Philadelphia Warriors had not been doing so well.

Thanks to Wilt however, they went from dead last to second place. It was also at this time that Wilt would meet the greatest rival of his time, Bill Russel.

Wilt and Bill would face against each other 8 times, but Wilt was victorious only once. Despite their fierce rivalry, Wilt Chamberlain and Bill Russel were also dear friends.

The day after Wilt’s death, Bill issued a statement that clues you into their relationship:

Boston Celtics legend Bill Russell issued a statement Wednesday about the death of his friend and rival, Wilt Chamberlain:

“I feel unspeakably injured. I’ve lost a dear and exceptional friend and an important part of my life. Our relationship was intensely personal.

“Many have called our competition the greatest rivalry in the history of sports. We didn’t have a rivalry; we had a genuinely fierce competition that was based on friendship and respect.

“Wilt was the greatest offensive player I have ever seen … I’ve seen none better. Because his talents and skills were so super human, his play forced me to play at my highest level. If I didn’t, I’d risk embarrassment and our team would likely lose.

“Out of respect for Wilt and Wilt’s family I’d rather not say much more at this time other than I’m going to dearly miss my friend Wilton Norman Chamberlain.”

Their rivalry is a much discussed part of basketball history, but it isn’t the entirety of Wilt Chamberlain’s career.

Wilt Chamberlain was such an incredible basketball player, many teams simply didn’t know how to handle him.

They often sunk to very low tactics in an effort to win against him, including physical abuse such as body checks, elbowing and shoving.

In his first year the hard fouls and heavy abuse against him was so bad, Wilt Chamberlain actually considered retiring.

Not only did he have to take every shot with players leaning or even hanging on him, he would often struggle against tag teams of two to three players at a time.

The interference was extremely demoralizing.

Luckily for history, Wilt chamberlain decided not to retire.

Instead he built up muscle to attempt to buffer his body against the blows of other players, and despite the efforts of the teams that played against him, he never fouled out of a game.

Long after he retired, the fact that he played so many seasons and never once fouled out remained the achievement Wilt Chamberlain was most proud of.

In his second year, Wilt Chamberlain managed to perform even better than his rookie year.

He managed to raise his per point average to an unbelievable 50.4 points per game, and became the only player in NBA history to score 4,000 points in a single season.

Wilt continued to lead in scoring all through 1962 and 1963. He was eventually swapped to the 76ers however, in exchange for Connie Dierking, Lee Shaffer, Paul Neumann and $150,000.

He was put on a team with other up and coming basketball players, including Chet Walker and Luke Jackson.

The season after he started with the 76ers, they had the best record in the league at 55-25.

Despite his best efforts however, Wilt was not able to lead the 76ers to victory. They lost to Boston, and did so two years running.

In 1967 however, they were able to change their fate. The 76ers, playing against the Warriors, were finally able to triumph and win the championship.

Although Wilt Chamberlain was certainly one of the best basketball players in history, during his career he was only able to successfully bring his team to two NBA titles during his career.

This championship was one of them.

After this, Chamberlain’s incredible scores slowly declined as years went on.

This was due largely to requests from coaches who asked Chamberlain to pass the ball more in an effort to win the game.

Although Chamberlain had a very impressive shooting average, they often didn’t win.

When Chamberlain switched to more aggressive tactics and passed the ball more his scores went down, but their win percentages went up.

Although this lowered his shooting average to a much more modest 24.3-24.1. In an interview with the Philadelphia News Tribune, Wilt denied this having to do with a decline in ability.

I stopped shooting — coaches asked me to do that, and I did. I wonder sometimes if that was a mistake.”

Although he may have felt conflicted about his lower shooting average, the fact that he was dedicated to his team and working as a team player can’t be denied.

As evidence for this, in 1967-68, he lead his team in assists instead of his usual averages.

Chamberlain played for 13 years, and his final 5 seasons were some of his best in terms of wins.

In his final 5 seasons he played for the Los Angeles Lakers, and brought them to victory 4 out of 5 times. Although it reduced his average down to a much more modest

He retired with a mind boggling 31,419 points, a record that only 3 other basketball players have surpassed since he set it.

He retired at the end of the 1972-73 season, but as with many other NBA players his story doesn’t end there.

As incredible as he was as a basketball player, his talents in other areas were proven after he stepped away from the court.

Wilt Chamberlain became a pro level coach for basketball, but quickly grew bored of it due to being unable to play.

He dabbled in movies, including playing in Conan the Barbarian.

He was elected to the Naismith Memorial Basketball Hall of Fame the very first year he was eligible for it, and although he was invited to return to the court several times, he always declined.

One of his last offers came nearly 18 years after he had last played on the courts. Basketball teams still thought the legend could put in a solid performance at 53, and he was invited to play for the Lakers.

Although Wilt was quick to let them know he certainly did have the ability to play still, he never did take them up on their offer.

At the time he said he wouldn’t be able to play like he did in the 60’s, but the numbers he suggested he could reach were still NBA level.

His efforts after retirement also included two biographies. The first one, written for him by David Shaw was entitled Wilt: Just Like Any Other 7-Foot Black Millionaire Who Lives Next Door.

He would also write another one that touched on topics closer to his heart in 1991, which was entitled “A view from above.”

The book talked about less well known aspects of his life, such as what he thought of other basketball legends, his time with the Harlem Globetrotters, and even simple things like what it’s like to be famous.

Wilt Chamberlain passed away at his home at the age of 63. He died from congestive heart failure.